skip to main | skip to sidebar

Too much weave to handle 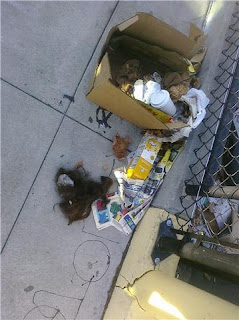 WOW so it has been over a month since my last post. For that I fail. So today I am giving you too much weave to handle. First this weave was emailed to me today from my friend Michael. He saw this by Best Buy in San Francisco on his way to work. There is certainly more than just weave going on here. I am wondering if the weave was outside of the box and maybe someone grabbed it out and realized it was not their color. Or maybe it was blowing by like a tumbleweave and it got caught up with all this trash. Either was I love that Michael sent it in.

Next we have this video that is a few weeks old. It has been circulating the Internet for a bit now. I have seen it a dozen times. But my dear friend Cecilio emailed it to me at randomweaves@hotmail.com and I realized I had to share

This queen had just won some gay title in Brazil. I think I don't understand what they are saying. And in an interview after she/he had won this other queen comes up and snatches her crown and weave all at once. It is kind of amazing. And is it me or does the jealous snatching queen look like Shannel from from RuPaul's Drag Race?

Next I would like to give snaps to Shelly. She sent me a text on Sunday that she had seen 2 weaves on the street on Sunday but could not stop and take a picture. I do love that when you think of weave you think of me. And I am also ashamed to admit. But sometimes I am so busy I don't have time to stop and smell the fresh weave and get a pic of all the weave I see.

Lastly, a reader of this blog (and I just thought my friends read this) sent in a link to his flickr gallery that features all the weave he sees in West Oakland. Thank you Brian. There certainly is a LOT of tumbleweave in West Oakland:
http://www.flickr.com/photos/babycujo/sets/72157621703405372/

I think I may have to go there for a scouting trip.
Posted by Silvio Blogs at 4:09 PM

How it all started:

Random Weaves is the brain child of my friend Kaveh and I. It all started when I discovered a weave on the muni train. Next thing you know we have found them all over the city. We felt this needed to be shared. Enjoy.

Famous Weave Quotes: Know of a funny weave quote from a movie, song, television show, any where. Submit them to randomweaves@gmail.com and we will post them here.

Find A Weave? Seen one on the street? Under your Bed? Weaves are everywhere. Take a picture and email it to us at randomweaves@gmail.com